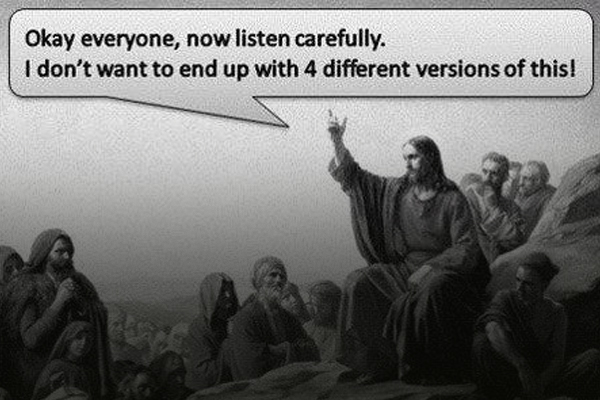 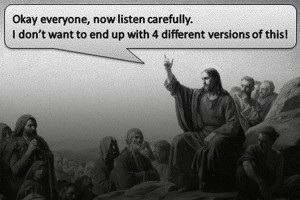 I’ve worked more cases involving witnesses than I can even count. A career in law enforcement will put you in direct contact with eyewitnesses on a daily basis, starting with your very first night on the job. After interviewing literally thousands of witnesses over the course of twenty five years, I think I’ve learned something about reliable eyewitness testimony. I want to share three simple characteristics of reliable eyewitness testimony and relate these three characteristics to the Gospels:

Reliable Eyewitnesses Never Agree
In all the cases I’ve ever worked, from simple theft and assault cases, to robberies and homicides, I’ve yet to have a case where the witnesses of the event agreed on every single detail. It’s never happened. I’ve learned that perspective is important, and it’s not just one’s physical perspective that determines what a witness did or didn’t see. When you’re staring down the barrel of a robber’s pistol, you have a tendency to miss certain details that are picked up by the witness who is watching from across the isle of the liquor store. There are many factors that contribute to one’s perception of an event. Physical location, past experience, familiarity with a feature of the crime scene; a witness’ physical, emotional and psychological distinctives play a role in what they see and how they communicate this testimony after the fact. No two people are alike, so no two people experience an event in precisely the same way. If you’ve got three witnesses in a murder case, expect three slightly different versions of the event. Don’t panic, that’s normal. In fact, when three different witnesses tell me the exact same thing, I start to get suspicious.

Reliable Eyewitnesses Raise Questions
As a young, inexperienced investigator, I used to think that an eyewitness would answer all my questions about an event. I wish this were true, but the reality is that for every question an eyewitness answers about what occurred at a crime scene, a new question is often raised. There are times when eyewitnesses even raise more questions than they have answered. I’ve worked a number of cold-case homicides in which an eyewitness account was captured decades ago, at the time of the original investigation. After reading the testimony, I was left with a few troubling questions. How could the crime have occurred like the witness described it? How could the suspect have done what the witness said? There are times when an eyewitness just doesn’t seem to make a whole lot of sense. But after paging through the case file to the next eyewitness statement, the questions raised by the first eyewitness are sometimes answered by the second observer of the event. I call this “unintentional eyewitness support”; times when an eyewitness raises questions that are then unintentionally answered by a second observer. I’ve seen this so many times over the past twenty-five years, that I’ve come to recognize it as a feature of reliable eyewitness testimony.

Reliable Eyewitnesses Are Sometimes Incorrect
There are times when an eyewitness gets something wrong. In fact, I’ve seen this repeatedly over the course of my career. Witnesses are people and people make mistakes. But the fact that a witness might be wrong about a particular detail or element of the crime does not necessarily disqualify them or render their testimony unreliable. If that were the case, we would never be able to prosecute anyone for anything. When examining the reliability of an eyewitness and encountering some factual error, I’ve got to determine (1) if the errant aspect of the statement is relevant to the larger issues in the case, and (2) the reason why the witness got the detail wrong in the first place. If a victim of a robbery misidentifies the kind of shirt the suspect wore at the time of the robbery, I have to ask myself this misidentification makes the victim an unreliable witness. Is there a reason why the stress of the situation may have caused the victim to focus on issues other than the kind of shirt the robber wore? Is the truth about the shirt captured in some other way (like in the surveillance video) that can help us determine the truth of the matter? Does the misidentification of the shirt make a difference to the larger nature of the case? Is the victim accurate on the other more pertinent details of the crime? A witness can be incorrect about a particular detail, yet still be reliable as an eyewitness.

Now let’s take a look at the gospel accounts. Skeptics often cite the variations between accounts as evidence of their unreliability. As a detective who has worked multiple eyewitness cases, I find their variations to be with an expected and acceptable range. And, like other cases involving more than one eyewitness, I find that some gospel accounts raise as many questions as they seem to answer. Interestingly, I also see the expected “unintentional eyewitness support” from one gospel account to another (I’ve written about this in my book); this support is precisely what I’ve seen in cold-case homicides that I’ve worked. Finally, let me say something about inerrancy and reliability. While I believe that the original gospel narratives are inerrant, I don’t need this standard to trust what the gospel accounts have to say about Jesus. Remember, reliable accounts are sometimes incorrect in some particular detail. This does not necessarily disqualify them, especially if the detail is not essential, can be understood on the basis of some additional testimony or evidence, and if the error on the part of the witness can be explained. Inerrancy is not required of witnesses in a court of law, reliability is. With a standard far lower than the gospels possess, the documents can still be considered reliable.

I spent the first nine years of my career investigating crimes as a committed atheist. Even then, I would have approved the notion that witnesses who fail to agree on every detail, raise as many questions as they seem to answer and are inaccurate in some detail of the event, could still be trusted as reliable eyewitnesses. Even my old atheist criteria for eyewitnesses would have been sufficient to make the case for gospel reliability. I now know that the gospels actually exceed what I would require to consider them reliable.