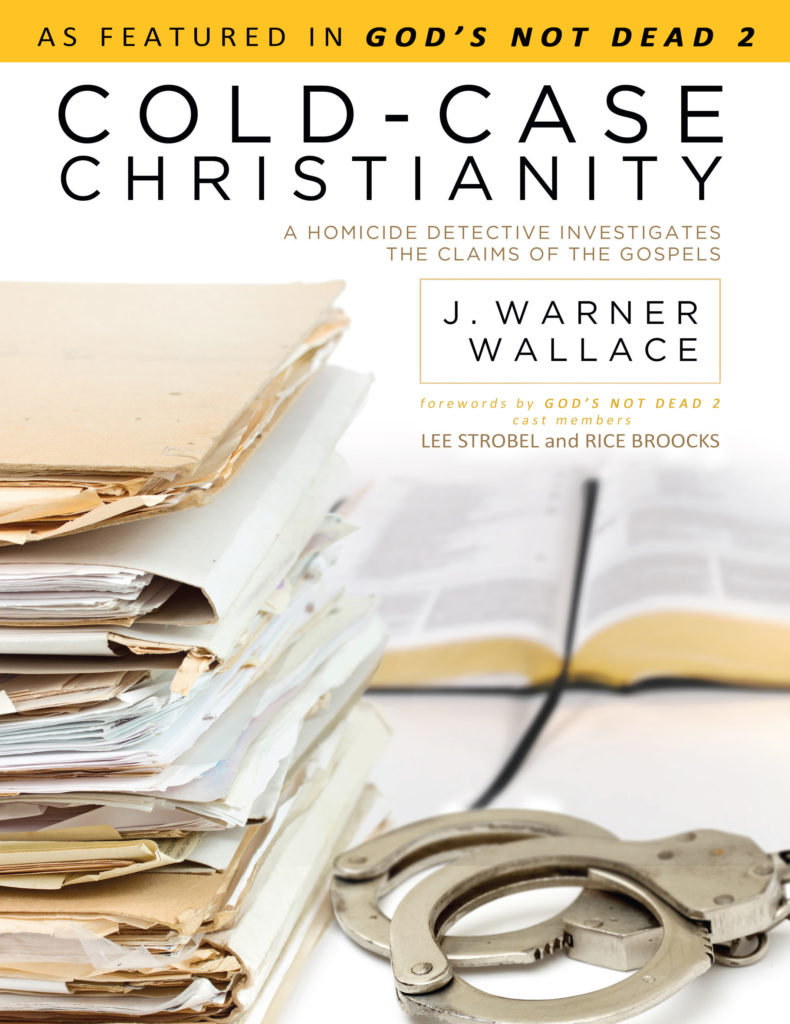 Now Is The Time to Read Cold Case Christianity
The historic truth claims of Christianity are under attack from every direction. If ever there was a time to study the case for the eyewitness reliability of the gospels, the time is now, and Cold-Case Christianity (featured in God’s Not Dead 2) will help you respond:

Anti-Christian Books Are Increasingly Influential
Books like Richard Dawkins’ The God Delusion, Christopher Hitchens’ God is Not Great, Sam Harris’ Letter To A Christian Nation, and Bart Ehrman’s Forged: Writing in the Name of God – Why the Bible’s Authors Are Not Who We Think They Are have influenced millions of readers and challenged the essential truth claims of the gospel accounts.

Fewer People Identify Themselves As Christians
The number of people who identify themselves as Christians in America, for example, has decreased by over 10% in the past 20 years (American Religious Identification Survey 1990-2008)

Intellectual Skepticism Is a Growing Problem
When young ex-Christians are asked about their reasons for leaving, the largest percentage identify intellectual skepticism or doubt as the culprit (Smith and Denton, Soul Searching: The Religious and Spiritual Lives of American Teenagers, 2005)

1. Events that occurred in the distant past
2. For which there are typically no living eyewitnesses
3. And little or no direct physical evidence

These cases are made by examining the nature of circumstantial evidence and assembling a convincing, cumulative circumstantial case. The claims of the New Testament Gospels can be similarly investigated:

1. The gospels record events that occurred in the distant past
2. For which there are no living eyewitnesses
3. And no direct physical evidence

The tools used by Cold Case Investigators can be applied to the New Testament gospels to determine if the facts they represent are a true record of the life of Jesus.

Learn to Be A Good Detective
Cold Case Christianity will:

Provide you with ten principles of Cold Case Investigations and equip you to use these concepts as you consider the claims of the New Testament gospel authors. These simple principles will give you new insight into the historic evidence for Christianity.

Provide you with the confidence and encouragement necessary to make an impact on your world. As your evidential certainty grows, so too will your desire to share the truth with others. Cold Case Christianity will equip you to reach others with the truth. 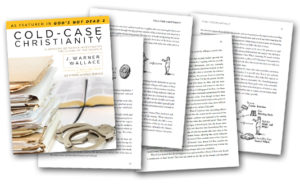 Start the Book for FREE!
Cold-Case Christianity will help you understand the power of circumstantial evidence, drawing on nearly 25 years of law enforcement experience (15 years spent working Cold Case Homicides). As a seasoned detective, J. Warner Wallace will share his personal journey from atheism to Christian certainty while describing the essential components of eyewitness reliability, abductive reasoning and the rules of evidence. You’ll come away with fresh insight and the ability to articulate what you already intuitively understand from your cultural familiarity with homicide investigations. You’ll also be able to apply this renewed understanding to the case for Christianity. Read Chapter 3 for FREE before you buy the book! Download it HERE.

Purchase Cold-Case Christianity TODAY! Here’s what others are saying:

“What happens when an atheist cop takes the same forensic skills he uses to solve the toughest crimes—homicides with a trail that’s been cold for decades—and applies them to the eyewitness testimony and circumstantial evidence for the life of Jesus of Nazareth? A fascinating new approach to the question of Gospel credibility, that’s what. Cold Case Christianity is simply the most clever and compelling defense I’ve ever read for the reliability of the New Testament record. Case closed.”

Gregory Koukl
President Stand to Reason, Speaker and author of Tactics: A Game Plan for Discussing your Christian Convictions

“In his savvy and captivating book, J. Warner Wallace will introduce you to the kinds of tools and techniques that he routinely uses to crack unsolved murders that have long baffled other cops. He will show you how this same analytical thinking can be used to crack the case of a long-ago killing on a cross – and the incredible resurrection that followed. It’s a fascinating process, with Jim drawing on his quarter century of police experience to explain how and why the evidence of history decisively tips the scales in favor of Christianity.”

Lee Strobel
Investigative Journalist, Speaker and author of The Case for Christ and The Case For Faith

“My friend J. Warner Wallace is one of the most thoughtful and winsome apologists for the Gospel I know. Cold-Case Christianity is literally packed with insights to share with the skeptics in your life and this book will give you the confidence to share it!”

“The moment I heard of J. Warner Wallace’s idea for a book, I thought it was one of the freshest ideas I’d heard in a long time. And now seeing the book in hand, he totally delivers. This is one of the most fun and clever ways to learn just how strong and enduring the case for Christianity is. I’ve always maintained that if we apply standard tools of investigation in an unbiased way that Christian truth claims would be vindicated. Jim’s “cold case” detective work shows this idea to be right on the money.”

“‘Cold-Case Christianity‘ reads like the fast-paced detective drama it actually is. The book is chocked full of interesting evidence and arguments, and it is unique among the literature in exhibiting a legal-reasoning approach to the evidence for and against historic Christianity. I enthusiastically endorse this great book and thank J. Warner Wallace for his excellent work.”

“J. Warner Wallace ‘s Cold-Case Christianity offers a fascinating angle on the evidence for the resurrection of Jesus. While Wallace does have experience as a former atheist—a bonus feature—he brings his expertise as a cold case detective to bear on the forensic aspects of the events surrounding the first Easter. This book is a unique contribution to the growing literature on Jesus’ resurrection.”

“Cold-Case Christianity is one of the most insightful, interesting, and helpful books in defending the faith I have read in a long time. Whether you are a Christian or a skeptic, J. Warner Wallace will challenge you to consider the evidence through fresh eyes. I have been studying the evidence for the faith for many years, and yet Jim helped me look at the historical, scientific, and philosophical facts in a new way. I could not recommend it more.”

Sean McDowell
Educator, Speaker, and author of Is God Just a Human Invention?

“Cold-Case Christianity is a fantastic book. I wish I had this resource when I was first examined the Christian faith. It would have answered many of my questions and help set me on the track to truth.”

Josh McDowell
Speaker and author of Evidence that Demands A Verdict

“With his background as a detective, J. Warner Wallace is qualified to sift through evidence and reach well-reasoned conclusions. Jim’s Cold-Case Christianity is therefore unique among apologetics resources available today: the facts of history and related evidence are examined via the same protocols that a professional investigator would follow in handling a case. Wherever one falls on the faith spectrum, Christian, skeptic, or somewhere in between, Jim’s application of investigative principles in his examination of Christianity makes for a ‘must-read’ contribution to the realm of apologetics.”

“Cold Case Christianity offers a fresh approach to Biblical fact-finding that actually makes apologetics fun! I highly recommend it to anyone interested in the evidence that backs up the Christian faith, whether you’re a skeptic, a spiritual seeker, or a committed believer. Everyone will benefit from reading J. Warner Wallace’s powerful new book.”

Mark Mittelberg
Author of The Questions Christians Hope No One Will Ask (with Answers), and coauthor of Becoming a Contagious Christian

“WARNING: Do not start reading this book unless you have time set aside…You will NOT be able to put it down. This is a one-of-a-kind, ground-breaking book that everyone should read. J. Warner is a man who is in a unique position to investigate the claims of Christianity. He is quickly becoming my favorite apologist. 12 stars out of a possible 10!”

Don Stewart
Host of Pastor’s Perspective, author of over 70 books

“The work of an investigator requires an eye for observation and a mind to recognize its relevance. God has blessed Jim Wallace with such gifts. Those gifts have been sharpened by years of use and proved in such works as this. In the tradition of the great Sir Robert Anderson of Scotland Yard, Wallace digs for the facts and presents them reasonably.”

“Cold-Case Christianity reads like an exciting detective novel and a textbook at the same time. Using his seasoned detective skills, J. Warner Wallace builds an incredible case that Christianity must be true. I’d love to bring him to every college campus in America to present his case and let the students be the jury.”

“I have had the pleasure of working with J. Warner Wallace for the past 25 years and it is what I have learned from him that I cherish the most. His brilliant work, Cold-Case Christianity, provides readers with an opportunity to learn from Jim’s experiences as a cold case detective and discover his true passion; a passion that is equally matched by his character, knowledge, and wisdom. Cold-Case Christianity has opened a new resource for all to see and displays the endless contributions Jim has made to Christianity.”

“I am fortunate to be both J. Warner Wallace’s friend and former chief and thoroughly enjoyed reading Cold-Case Christianity. Jim is a seasoned and incredibly skillful investigator who has a real talent for uncovering the important pieces of evidence and logically linking them together to arrive at the truth. This book is a compelling investigative work paralleling the steps Jim takes while investigating a crime with the steps he has taken to reveal the truth about Christ. Cold-Case Christianity is a bright light that illuminates the truth in a persuasive and convicting style.”

“J. Warner Wallace, my colleague in the fraternity of law enforcement, has made a valuable contribution to this generation and those to come. His book has the potential of becoming a classic for those seeking truth. Jim does a superb job of using the discipline and logic of a police detective as a matrix through which to examine the evidence for God, Jesus, the reliability of Scripture, and the message of the gospel. Skeptics, seekers, and committed believers will all find his analysis interesting and compelling. Armchair detectives and scholars alike will treasure this work. This book will be an important resource in my personal library.”

“As a long-time prosecutor, I have come to appreciate the persuasive power of a circumstantial case. J. Warner Wallace has made a career investigating ‘cold case’ homicides. He now brings that dogged pursuit of truth and hard-nosed judgment to the world of ancient documents, witness statements and changed lives. From forensic statement analysis to assessment of motives to an in-depth analysis of what makes conspiracies tick, Jim presents the material in a way that is both readily accessible but also sufficiently in-depth to carry the ‘burden of proof.’”

“Today Americans are searching for truth. The most fundamental truth is the reality of a sovereign God. During his journey from agnosticism to apologetics, J. Warner Wallace uses his ‘cold case’ investigative techniques to prove the reality of the divine. READ his book. You will not regret it.”

“Detective J. Warner Wallace is as creative telling a story as he is solving a crime. This is his ultimate case, where he investigates his own personal transformation by applying many lessons he learned on the job.”

Download the Cold-Case Christianity Preview Kit to learn even more about the book.