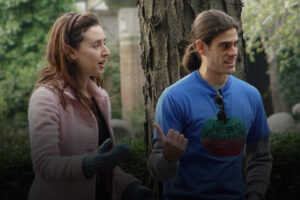 If you’re interested in “apologetics” (the defense of the Christian faith), you’re probably interested in arguments. Not the “heated, angry exchanges between people who hold opposing views” (one definition of the term), but “the reason or set of reasons given with the aim of persuading others that an claim is right or wrong.” Christian apologists engage the second definition of the term: What’s the best argument for Christianity? How can we refute the arguments of atheists or other non-believers? How can we convince someone else to believe what we believe?

Sometimes it’s easy for me to get too focused on making the argument. I know the reasons why I believe what I believe, and when I hear an objection my first impulse is to spell out all the reasons the person I’m talking to is wrong. My passion for my beliefs can lead me to be aggressive in my pursuit of winning the intellectual debate. Sometimes I can be so focused on “winning” the argument that I can become argumentative.

Therein lies one of the biggest problems we can run into as defenders of the faith. It’s easy to become so focused on the truth of the arguments that I lose sight of the person I am talking to. If I “win” the argument, but alienate the person, I’ve missed the point entirely. It is my hope that I might evangelize through effective apologetics, but I can’t lose sight of the goal along the way: I want to bring other people to Christ.

During Jesus’ famous Sermon on the Mount, He said, “You are the light of the world. A town built on a hill cannot be hidden. Neither do people light a lamp and put it under a bowl. Instead they put it on its stand, and it gives light to everyone in the house. In the same way, let your light shine before others, that they may see your good deeds and glorify your Father in heaven.” (Matthew 5:14-16). During this passage, Jesus compared us to “light” which draws people out of the darkness. He also reminded us of the importance of goodness (“good deeds”). We are called to interact with others to draw them out of the darkness while demonstrating the character of Jesus along the way.

Jesus is our role model in this regard. One of the many complaints the Pharisees had about Jesus was that he would associate with sinners. Jesus would dine at the house of tax collectors, associate with prostitutes, and the religious leaders of that day found this behavior abhorrent. But Jesus developed a relationship with these sinners and called them out of the darkness. Jesus loved them and they knew it. He opened the door for his message.

And His message wasn’t always easy.

Jesus did not sugarcoat the Word of God; He spoke about the majesty of God and the depravity of humans. He called out the hypocrisy of the religious leaders and turned over the tables of the money lenders when appropriate. Jesus demonstrated the balance between mercy and justice. He calls us to do the same.

I sometimes fall into one extreme or the other: speaking in love to the point in which I avoid or misrepresent hard truths or speaking the truth so adamantly that I no longer have a loving approach. If I am loving to those around me but fail to speak the Gospel message, then I am no longer being an effective follower of Christ. But if I speak the truth without love or in a way which turns off my audience, then I am similarly ineffective. I want to keep my focus on Jesus’ example and strive to be a great communicator. In my love for apologetics, in my love for the arguments, even in my love for arguing, I don’t want to lose sight of the purpose of the apologetics: to bring people to a faith in Jesus.