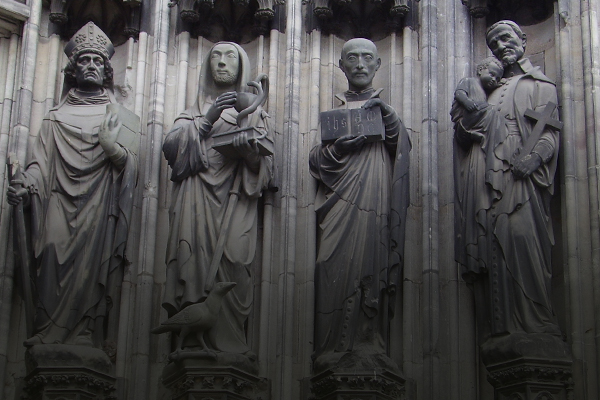 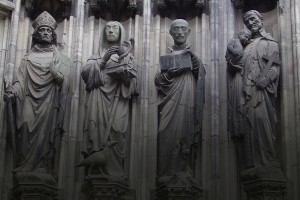 I’ve written at length about the late non-canonical gospels, and in this article, I’d like to investigate two documents attributed to Bartholomew. All of these texts were rejected by the Christian community even though they often contain nuggets of truth related to Jesus. They are elaborate stories, legends and fabrications, written by authors who were motivated to alter the history of Jesus to suit their own purposes. The texts attributed to Bartholomew, like the other we’ve examined so far, are alternative narratives fabricated from the foundational truths of the original Gospels. Much can be learned about the historic Jesus from these late lies, including these non-canonical documents falsely attributed to the Apostle Bartholomew:

The Book of the Resurrection of Christ by Bartholomew the Apostle (200-550AD)
This text has been reconstructed from three Coptic fragments and additional pieces of papyri (the Coptic language was spoken in Egypt until the 7th century). The dating for the book has been very difficult to establish. The British Museum possesses the best manuscript of The Book of the Resurrection of Christ by Bartholomew the Apostle, but this manuscript dates to the 12th century. There are fragments of the text that are much older, but scholars are undecided on the original date of authorship. Some place it as late as the 5th or 6th century given its similarities to other Coptic literature. Some scholars believe that this book is, in fact, the lost Gospel of Bartholomew, although it is unclear what relationship this text or the Questions of Bartholomew might have to the missing Gospel.

Why Isn’t It Considered Reliable?
While the text claims to have been authored by the Apostle Bartholomew, the date of authorship (even considering the earliest possible dating by scholars), is far too late to have been penned by anyone who was an eyewitness to the life of Jesus. If this text is, in fact, the lost Gospel of Bartholomew (as some scholars have maintained), there is a record of it amongst the writings of the Church Fathers. Jerome (early 5th century) mentions the Gospel of Bartholomew in the prologue of his Commentary on Matthew and labels it as an unreliable apocryphal work. In addition, Pope Gelasius (late 5th century) includes the Gospel of Bartholomew in his list of apocryphal Gospels.

How Does It Corroborate the Life of Jesus?
The Book of the Resurrection of Christ by Bartholomew the Apostle acknowledges a number of details related to the life and ministry of Jesus. Jesus is described as “all-powerful” and identified as the “First Born of the Father”, “the Saviour”, the “Son of God”, the “Holy Lamb” and the “Shepherd” who came from Heaven. Judas Iscariot is identified as the man who betrayed Jesus, and the crucifixion and the death of Jesus are acknowledged, along with the piercing of His side. The resurrection of Christ is also described, along with several details of the narrative paralleling the Biblical account. Jesus’ body is recovered by Joseph of Arimathea, laid in a new tomb, wrapped in linen and anointed with oils and perfumes. An earthquake is describe and the tomb is visited by the women who followed Him during His ministry (including his mother Mary, Salome, Mary Magdalene, Mary and Martha). Jesus appeared to this group and His disciples after the resurrection and He ascended to Heaven, sitting at the right hand of the Father. Jesus’ disciples are acknowledged and named: Bartholomew (of course), Peter, Andrew, James, John, Philip, Thomas, Matthew, James son of Alphaeus, Simon Zelotes, Thaddeus, and Matthias.

Where (and Why) Does It Differ from the Reliable Accounts?
The text focuses on the Passion of Jesus (events surrounding His death and resurrection) and the Eucharist. Bartholomew is given a place of prominence in the text (something very common for apocryphal texts in which an apostle is cited as the author in order to provide a sense of authority). Like some of the Infancy Gospels, The Book of the Resurrection of Christ by Bartholomew the Apostle appears to have been written in order to fill in details related to the Passion narrative. In addition to this, the book may also have been written to give authority to a Eucharist liturgy used by a local Egyptian sect of believers. The text describes Bartholomew as being lifted into heaven to observe the heavenly liturgy celebrating the resurrection as if to legitimize and provide authority for earthly Eucharist celebrations.

Why Isn’t It Considered Reliable?
Like The Book of the Resurrection of Christ by Bartholomew the Apostle, this text claims to have been authored by the Apostle Bartholomew. But once again, the date of authorship (even considering the earliest possible dating by scholars) is far too late to have been penned by the real Bartholomew. Similarly, if this text is the lost Gospel of Bartholomew, it was also rejected by the Fathers of the Church on grounds that it was a heretical fraud. The Questions of Bartholomew is similar to Gnostic dialogue Gospels in which a key disciple of Jesus is provided with secret wisdom that is intended for a select few. In this respect, it is yet another Gnostic, heretical document identified by early Church leaders.

How Does It Corroborate the Life of Jesus?
The Questions of Bartholomew does acknowledge several aspects of the reliable Gospel accounts. Jesus is identified as “Lord” and is the source of spiritual wisdom. The text acknowledges Jesus was crucified on a cross and was resurrected. In addition, the darkness that occurred at the death of Jesus is mentioned. Jesus’ disciples are acknowledged, including Bartholomew, Peter, Andrew and John. The virgin conception of Jesus is acknowledged (although the text supports the notion Mary was a perpetual virgin)

Where (and Why) Does It Differ from the Reliable Accounts?
The text is clearly Gnostic and portrays Jesus as coming to earth from the Father to provide men with the secret wisdom required to “heal every sin”. In addition, the text demonstrates a Gnostic view of the material body. Jesus tells His disciples He cannot tell them the secret mysteries of heaven until He puts off “the body of the flesh”. The text is filled with secrets related to Jesus’ descent into Hell prior to the resurrection, the immaculate conception of Mary and secrets provided by Satan himself related to his creation and his fall. Throughout all of this, Jesus instructs Bartholomew this information is not to be shared with those who are unworthy, reflecting a Gnostic value for esoteric knowledge.

Many skeptics point to the very existence of any ancient alternative stories of Jesus in an effort to cast doubt on the reliability of the canonical accounts. But these late fictional narratives, when assessed under the template we typically use to determine eyewitness reliability, cannot withstand the scrutiny. They are authored too late, contain uncorroborated claims, and were penned by authors motivated to use the name of Jesus for their own purposes. The texts attributed to Bartholomew were not actually written by the Apostle, and there are good reasons to exclude them from the reliable record. The four canonical Gospels (Mark, Matthew, Luke and John) are still the earliest reliable record of Jesus, written within the lifetimes of the eyewitnesses who knew Jesus personally.