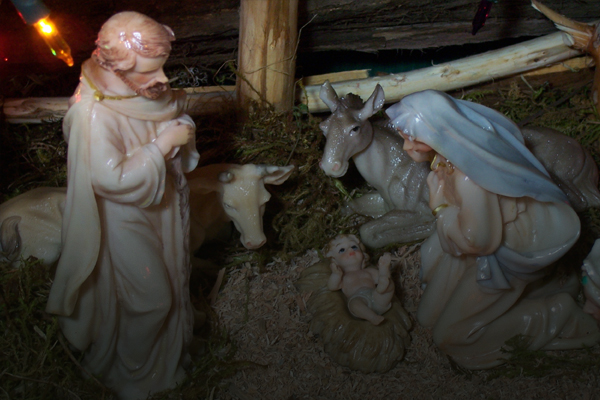 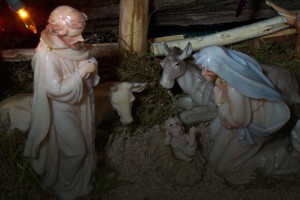 Jesus was not born on December 25th. When was He born and why do we celebrate His birth during the December Christmas Season? While the Bible is silent about the precise month or day on which Jesus was born, a careful investigation of the indirect (circumstantial) evidence of Scripture provides us with a reasonable time frame.  Here’s what we do know:

Jesus’ Birthday Based on the Pattern of Shepherds
It was the Jewish custom for shepherds to send their sheep into the fields in early Spring (at about the time of the Passover). They didn’t bring these sheep home until the first rains started in early to mid-fall. Shepherds would stay with the sheep to insure their safety, both day and night, until they drove their flock back early in the month of “Marh-esvan” (sometime in October). The New Testament associates the birth of Jesus with this season of shepherding:

Luke 2:8
And in the same region there were some shepherds staying out in the fields, and keeping watch over their flock by night.

It is clear the shepherds were living in the fields with their sheep. The Greek word used here for “staying out” is agraulountes. It means that they were staying overnight; the shepherds were camping out, so to speak. They were actually living with their flock. Jesus was born within the range of time when shepherds drove their sheep into the open fields and stayed with them from May to October.

Jesus’ Birthday Based on the Pattern of Priests
According to Luke, John the Baptist’s father, Zacharias was a priest of the order of Abijah (Luke 1:5). After the return from captivity in Babylon and the restoration of the Temple, the priestly divisions once again began to serve. They attended the Temple in a particular order, and Josephus reported the first division (Jehoiarib) was on duty when Jerusalem was attacked during the first week of April, AD 70. Scholars have worked backward from this point to pinpoint the months in which Zacharias served. Many conclude Zacharias was serving in the Temple in June or December. It was during this time he was visited by an angel:

Luke 1:8-11
Now it happened that while he was performing his priestly service before God in the appointed order of his division, according to the custom of the priestly office, he was chosen by lot to enter the temple of the Lord and burn incense. And the whole multitude of the people were in prayer outside at the hour of the incense offering. And an angel of the Lord appeared to him, standing to the right of the altar of incense.

Luke 1:23-24
When the days of his priestly service were ended, he went back home. After these days Elizabeth his wife became pregnant…

If the dating of Zacharias’ service is correct, John the Baptist would have been born in March or September. According to Luke, Mary conceived Jesus six months after Elizabeth conceived John:

Luke 1:26-27
Now in the sixth month the angel Gabriel was sent from God to a city in Galilee called Nazareth, to a virgin engaged to a man whose name was Joseph, of the descendants of David; and the virgin’s name was Mary.

This would place Jesus’ birth in either September or March.

Jesus’ Birthday Based on the Pattern of the Census
Luke says Joseph and Mary were travelling from Nazareth to Bethlehem to register for the census:

Luke 2:1-5
Now in those days a decree went out from Caesar Augustus, that a census be taken of all the inhabited earth. This was the first census taken while Quirinius was governor of Syria. And everyone was on his way to register for the census, each to his own city. Joseph also went up from Galilee, from the city of Nazareth, to Judea, to the city of David which is called Bethlehem, because he was of the house and family of David, in order to register along with Mary, who was engaged to him, and was with child.

Everyone was travelling to comply with this census, and there are many places in Scripture where the rainy season in this region of the world is described as prohibitively harsh:

Ezra 10:9-13
So all the men of Judah and Benjamin assembled at Jerusalem within the three days. It was the ninth month on the twentieth of the month, and all the people sat in the open square before the house of God, trembling because of this matter and the heavy rain. Then Ezra the priest stood up and said to them, “You have been unfaithful and have married foreign wives adding to the guilt of Israel. Now, therefore, make confession to the LORD God of your fathers, and do His will; and separate yourselves from the peoples of the land and from the foreign wives.” Then all the assembly answered and said with a loud voice, “That’s right! As you have said, so it is our duty to do. But there are many people, it is the rainy season, and we are not able to stand in the open. Nor can the task be done in one or two days, for we have transgressed greatly in this matter.”

The most reasonable time frame for Census undertaking would have been in the non-rainy season from May to October.

Three separate lines of reasoning appear to lead us to the same conclusion. Jesus was most likely born in the time frame from May to October, probably in September. But that won’t stop me from celebrating the birth of Jesus this year, even if we may not have the party on the right day. There’s more than enough evidence to demonstrate the historical reliability of the Gospel accounts related to Jesus’ birth, even if our subsequent, human traditions aren’t as historically accurate.