How Skeptics Use a Partial Truth to Tell a Complete Lie 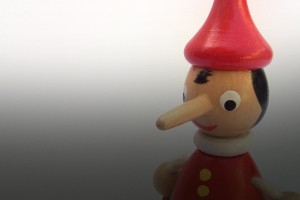 This has been going on for nearly 2,000 years. In the early centuries of Christianity, a number of groups attempted to co-opt the person of Jesus for their own purposes. There are dozens of late, non-canonical gospels written by authors who used a little truth to tell a much larger lie. Some did this in an effort to fill in the “gaps” left vacant by the canonical Gospels, some did this to support a heresy and others did this in an attempt to acquire power from an esoteric set of “secret” claims. In all these cases, folks driven by a variety of motives used a bit of truth to tell a big lie. Centuries later, other men, driven by motives of their own, repeated the effort. Joseph Smith built an entire religious system (Mormonism) by distorting and adding to the truths of the Old and New Testament. As a result, Mormonism has significantly (and errantly) redefined the truths of Christianity.  Other historic figures have similarly distorted the truth in an effort to reshape the person of Jesus, including Charles Taze Russell, Mary Baker Eddy, and John Thomas.

It’s important to take a close look at the motivations of those who claim to have NEW information about Jesus. Click To Tweet

Apologetics Christian Worldview nature of Jesus reliability of the Bible tactics of skeptics truth of Christianity 2018-05-25
+J. Warner
Previous What Challenges Are Facing the Church? (Podcast)
Next Woman Says It’s a Miracle Her Wallet Blocked Bullets – Why Not Believe Her?

Quarantine Questionnaire: Was Jesus Really Dead on the Cross?

The word “orthodox” does not actually appear in the Bible, but its meaning is affirmed …