Why Would a Good God Behave So Badly? 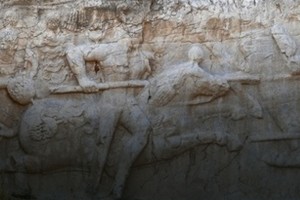 I have many unbelieving friends who laugh when I claim the God of the Bible is both all-powerful and all-loving. As they read through the Old Testament, they point to a variety of passages and episodes where God seems to be anything but loving. They cite passages, for example, where God seems to command the pillaging and killing of Israel’s enemies with great brutality. How can a God who would command the brutal destruction of Israel’s enemies be called moral or loving? It’s easy for us to judge the words and actions of God as if He were just another human, subject to an objective standard transcending Him. But when we judge God’s actions in this way, we are ignoring His unique authority and power. While great work has been done by Paul Copan (Is God a Moral Monster?: Making Sense of the Old Testament God), describing the proper context of these passages in the Old Testament, and by Clay Jones (Killing the Canaanites: A Response to the New Atheism’s “Divine Genocide” Claims), describing the view God held toward the sin of Israel’s neighbors, I would like to add the following observations about the nature of God as we consider His actions in the Old Testament:

God is the Greatest Artist
If you and I were in an art class together and I suddenly grew frustrated with my sketch and decided to destroy it, you wouldn’t complain in the least. If I stepped over to your easel and destroyed your sketch, however, you would certainly complain that I was doing something unjust. You see, the artist has the authority and right to destroy his or her own work. The art belongs to the artist. If there is a God, all of creation is His handiwork. He has the right to create and destroy what is His, even when this destruction may seem unfair to the artwork itself.

God is the Greatest Physician
If you or I suffered a snake bite on our elbow and were miles from the nearest hospital, a doctor might advise us (over the phone) to tourniquet the arm to save our life. In doing so, we would surely sacrifice an otherwise healthy hand to prevent the venom from spreading to our heart. But the doctor understands that this drastic action is required to prevent our death. You and I might not agree with the plan, or like the outcome, but the doctor knows best. The treatment plan belongs to the doctor. If there is a God, all of us are His patients. He has the wisdom and authority to treat us as He sees fit, even when we might not be able to understand the overarching danger we face if drastic action isn’t taken.

God is the Greatest Savior
If you and I live as though our mortal lives are all we have, we’ll often become frustrated that our lives seem to be filled with pain and injustice. But the Christian Worldview describes human existence as eternal. We have a life beyond the grave. We live for more than 80 or 90 years; we live forever, either with God in Heaven, or separated from God for all eternity. If there is a God, He is certainly more concerned about our eternal existence than He is about our mortal comfort. His plans are grander than our plans. His eternal desires are greater than our mortal desires. If there is a God, He is more concerned about saving us for eternity than He is about making our temporal lives safe.

If there is a God, He is more concerned about saving us for eternity than He is about making our temporal lives safe. Click To Tweet

Christians understand that there have been times in the history of humanity when God’s chosen people (those who placed their trust in Him) were in great eternal spiritual jeopardy from those who surrounded them. God understood the risk as the Great Physician and often prescribed drastic action to cut off the threat. God had the authority as the Great Artist to destroy what was His in the first place, and He also had the wisdom and compassion as the Great Savior to do what was necessary to protect the eternal spiritual life of His creation. If God failed to act in these situations, we would hardly call him all-powerful and all-loving.

evil Old Testament God is God a Moral Monster? killing in the Old Testament moral evil nature of God Problem of Evil 2017-06-16
+J. Warner
Previous The Case for Christianity – J. Warner Wallace on the Called2Action Radio Show (Podcast)
Next Why Would a Good God Allow Pain and Suffering?