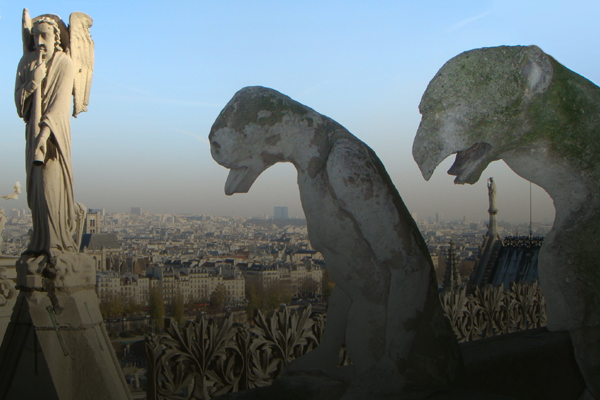 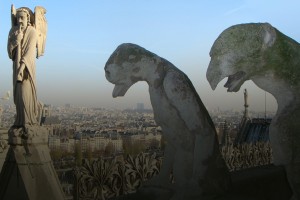 A recent study revealed 63% of young Americans (age 18-29) believe in demon possession. Even though fewer people in this age group claim any affiliation to organized religion, their belief in demons is actually increasing. While there are good reasons to believe in the existence of angelic beings (even apart from what the Bible teaches), the clearest description of angels and demons comes directly from the Biblical text. We’ve been examining the nature of angels in recent posts, but given the increasing cultural interest in demons, it might be wise to understand them more deeply. While angelic beings were originally were created to love God, demons have rejected him entirely. In many ways the story of angelic beings parallels our own experiences as humans. Demons rebelled against God in a manner similar to those of us who have also rebelled. Angels worship and honor their Creator and choose continually to help reunite all of creation to Him, but demons reject God and endeavor daily to oppose the spiritual understanding and development of humans (Ephesians 6:12). Angels and demons are the same kind of being; they share the same powers we’ve already described. The behavior of demons, therefore, can be contrasted with the behavior of angels:

Angels Appear Human / Demons Inhabit Humans
While angels appear in human form to demonstrate their empathy and love for us, demons enter human bodies to take on the form of those they are attacking:

Matthew 17:14-18
When they came to the crowd, a man approached Jesus and knelt before him. “Lord, have mercy on my son,” he said. “He has seizures and is suffering greatly. He often falls into the fire or into the water. I brought him to your disciples, but they could not heal him.” “O unbelieving and perverse generation,” Jesus replied, “how long shall I stay with you? How long shall I put up with you? Bring the boy here to me.” Jesus rebuked the demon, and it came out of the boy, and he was healed from that moment.

Angels Herald the Savior / Demons Shriek the Savior
While angels announce the Savior in love and expectation, demons scream his name in fear, provoking fear in those non-believers who may be watching:

Mark 3:11-12
Whenever the evil spirits saw him, they fell down before him and cried out, “You are the Son of God.”

Angels Celebrate Our Salvation / Demons Obstruct Our Salvation
While angels celebrate our salvation, demons do all they can to prevent our conversion. They often do this by simply attacking our ability to hear the word or to speak in response to the Gospel:

Mark 9:25
And when Jesus saw that a crowd was rapidly gathering, He rebuked the unclean spirit, saying to it, “You deaf and dumb spirit, I command you, come out of him and do not enter him again.”

Matthew 12:43-45
When an evil spirit comes out of a man, it goes through arid places seeking rest and does not find it. Then it says, ‘I will return to the house I left.’ When it arrives, it finds the house unoccupied, swept clean and put in order. Then it goes and takes with it seven other spirits more wicked than itself, and they go in and live there. And the final condition of that man is worse than the first.

Angels Seek to Unite Us / Demons Seek to Separate Us
While surround us in protection, demons are continually trying to separate us from God (fortunately we know they could never overpower the God who created them):

Romans 8:37-39
No, in all these things we are more than conquerors through him who loved us. For I am convinced that neither death nor life, neither angels nor demons, neither the present nor the future, nor any powers, neither height nor depth, nor anything else in all creation, will be able to separate us from the love of God that is in Christ Jesus our Lord.

Luke 4:33-35
In the synagogue there was a man possessed by a demon, an evil spirit. He cried out at the top of his voice, “Ha. What do you want with us, Jesus of Nazareth? Have you come to destroy us? I know who you are-the Holy One of God.” “Be quiet.” Jesus said sternly. “Come out of him.” Then the demon threw the man down before them all and came out without injuring him.

Angels Point Us to God / Demons Distract Us from God
God’s holy angels will someday take us back home to Him, but demons are doing all they can to distract us from the God of the universe. In fact, they try to accomplish this by acting as false gods to divert our attention from the true God:

Revelation 16:14
They are spirits of demons performing miraculous signs, and they go out to the kings of the whole world, to gather them for the battle on the great day of God Almighty.

Revelation 9:20-21
The rest of mankind that were not killed by these plagues still did not repent of the work of their hands; they did not stop worshiping demons, and idols of gold, silver, bronze, stone and wood-idols that cannot see or hear or walk. Nor did they repent of their murders, their magic arts, their sexual immorality or their thefts.

In our study of angelic beings, one thing should be clear. According to the Christian worldview, we are surrounded by an invisible reality; a host of angels and demons engaged in battles and victories. While we sometimes ignore the existence and activity of these beings, they continue to pursue opposing goals. As Christians, we can have confidence we have a Father who sent His Spirit to protect those who have placed our trust in Him. Jesus asked God the Father for this protection, and God continues to utilize His holy angels to accomplish His Goals:

John 17:9-16
I pray for them. I am not praying for the world, but for those you have given me, for they are yours. All I have is yours, and all you have is mine. And glory has come to me through them. I will remain in the world no longer, but they are still in the world, and I am coming to you. Holy Father, protect them by the power of your name-the name you gave me-so that they may be one as we are one. While I was with them, I protected them and kept them safe by that name you gave me. None has been lost except the one doomed to destruction so that Scripture would be fulfilled. “I am coming to you now, but I say these things while I am still in the world, so that they may have the full measure of my joy within them. I have given them your word and the world has hated them, for they are not of the world any more than I am of the world. My prayer is not that you take them out of the world but that you protect them from the evil one.

I’ve written previously about the reasonable existence and reality of the personal being that we, as Christians, call “Satan”. You can examine the philosophical...