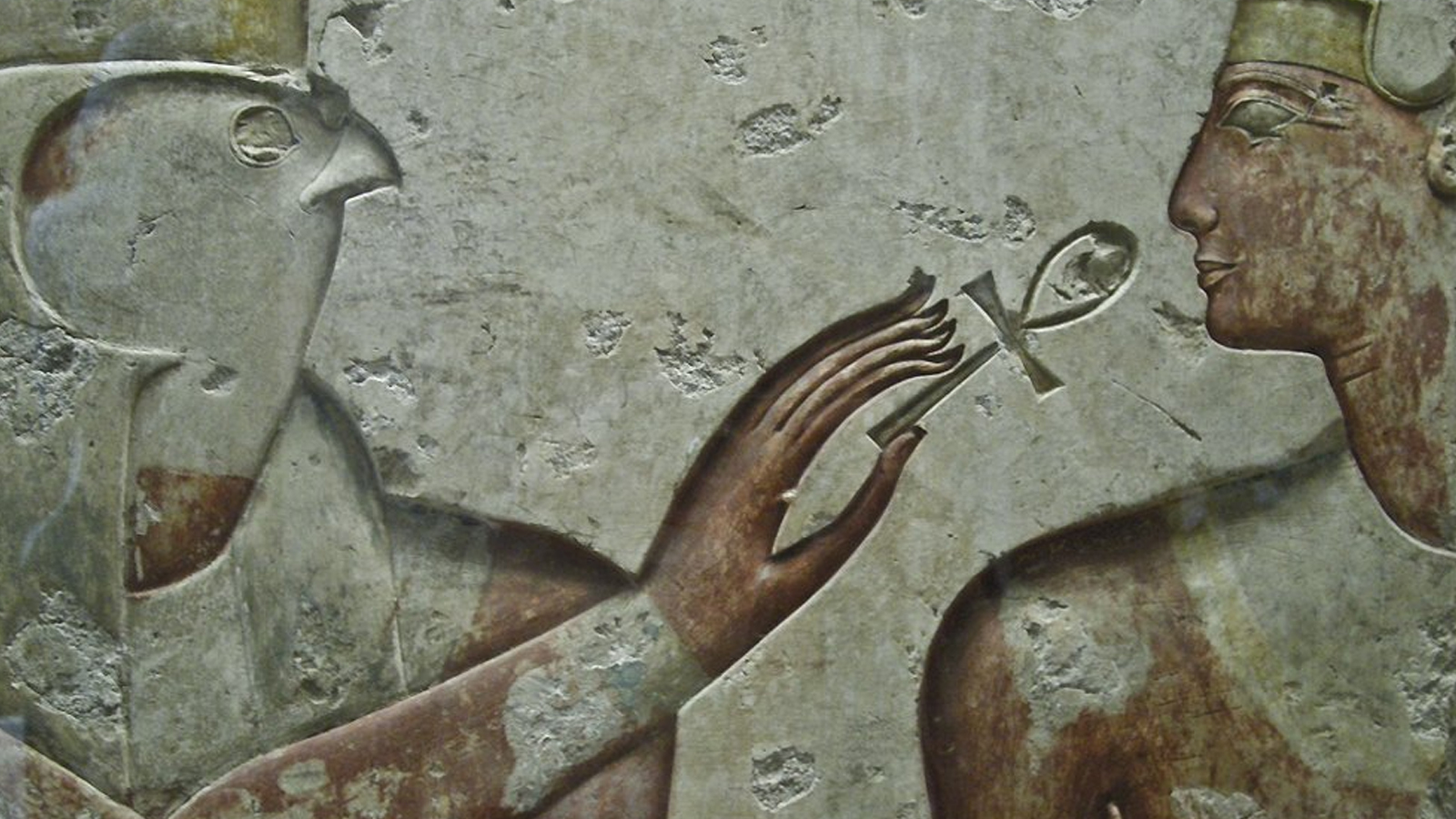 What if I told you there was once an ancient religion whose God was conceived by a virgin named Meri and had a stepfather named Seb (Joseph)? What if I told you this God was born in a cave and his birth was announced by an angel, heralded by a star and attended by shepherds? He attended a special rite of passage at the age of twelve (although the ancient texts describing this God are silent about His life from the age of 12 to 30). At 30 years of age, this God was baptized in a river (His baptizer was later beheaded). He had 12 disciples, performed miracles, exorcized demons, raised someone from the dead, and even walked on water. They called Him “Iusa”, the “ever-becoming son” and the “Holy Child”. He delivered a “Sermon on the Mount”, and his followers recounted his sayings. He was transfigured on a mount and eventually crucified between two thieves. He was buried for three days in a tomb and rose from the dead. His followers called Him “Way”, “the Truth the Light”, “Messiah”, “God’s Anointed Son”, “Son of Man”, “Good Shepherd”, “Lamb of God”, “Word made flesh”, “Word of Truth”, “the KRST” or “Anointed One”. He was also known as “the Fisher” and was associated with the Fish, Lamb and Lion. According to this ancient religion, this God came to fulfill the Law and was supposed to reign one thousand years. Sounds a lot like Jesus doesn’t it? According to those who deny the existence of Jesus, however, this description is of a mythological precursor to Christianity, the Egyptian God named Horus. Skeptics sometimes use ancient deities like Horus, Mithras or Osiris as examples of dying and rising precursors to Jesus. They claim the mythology of Jesus was simply borrowed from pre-existing examples such as these.

Was Horus really like Jesus in all the ways skeptics often describe him? These similarities are startling. For many Christians (especially young believers who encounter this objection while in college) similarities such as these cast doubt on the historicity of Jesus. It’s important, therefore, to examine the truth of these claims to see what the real mythologies tell us about characters such as Horus. While it’s true there are a number of pre-Christian mythologies with dying saviors, they aren’t much like Jesus once you start to examine them closely. They often merely reflect the expectations and yearnings of ancient people for the God who truly did come to earth. A significant portion of what we just described about Horus is simply false and lacks any Egyptian historical or archeological support whatsoever. Much of what I described about Horus is simply a reflection of the effort of atheists to make Horus look as much like Jesus as possible.

Horus was worshiped principally in two Egyptian cultural centers (Bekhdet in the north and Idfu in the south). Little remains at the northern location, but there is still a large and well preserved Ptolemaic temple at Idfu; most of our information about Horus comes from this southern temple. Horus was usually represented as a falcon. He was the great sky God and the Son of Isis and Osiris. Let’s take a look at the claims we’ve already described and separate truth from fiction (for a more in depth examination of Horus and many other alleged Christian precursors, please visit David Anderson’s excellent website. I’m condensing much of his work in this brief blog post). We’ll also look at some of the reasonable expectations and motivations causing these mythologies to resemble Jesus:

Claim: Horus was conceived by a virgin mother named Meri, and had a stepfather named Seb (Joseph)
Truth: Horus was NOT conceived of a virgin. In fact, mural and textual evidence from Egypt indicates Isis (there is no evidence that “Meri” was ever part of her name) hovered over the erect penis (she created) of Osiris to conceive Horus. While she may have been a virgin before the conception, she utilized Osiris’ penis to conceive. She later had another son with Osiris as well. There is no evidence of three wise men as part of the Horus story at all. Seb was actually the “earth god”; He was not Horus’ earthly father. Seb is not the equivalent of Joseph and, in most cases, Seb is described as Osiris’ father.

Claim: Horus was born in a cave, his birth announced by an angel, heralded by a star and attended by shepherds.
Truth: There is no reference to a cave or manger in the Egyptian birth story of Horus. In fact, none of these details are present in the ancient Egyptian stories of Horus. Horus was born in a swamp. His birth was not heralded by an angel. There was no star.

Claim: Horus attended a special rite of passage at the age of twelve and there is no data on the child from the age of 12 to 30.
Truth: There is no continuous effort in the Horus mythology to account for all these years, so there are no real gaps in the chronology. Horus never taught in any temple at twelve (as did Jesus).

Claim: Horus had 12 disciples.
Truth: Horus had only four disciples (called ‘Heru-Shemsu’), but at some point in his story there is reference to sixteen followers and a group of unnumbered followers who join Horus in battle (called ‘mesnui’).

Claim: Horus was crucified between two thieves, buried for three days in a tomb, and was resurrected.
Truth: Horus is not reported to have died at all in the vast majority of Egyptian narratives. There is also no crucifixion story. Instead, Horus is usually described as eventually merging with Re (the Sun god) after which he “dies” and is “reborn” every day as the sun rises. There is a parallel account describing Horus’ death and detailing how he was cast in pieces into the water, later fished out by a crocodile at Isis’ request.

Claim: Horus was called “Way”, “the Truth the Light”, “Messiah”, “God’s Anointed Son”, “Son of Man”, “Good Shepherd”, “Lamb of God”, “Word made flesh”, “Word of Truth”, “the KRST” or “Anointed One”.
Truth: None of these titles are in Egyptian history, but Horus is called by several names you might expect for any god in mythology: “Great God”, “Chief of the Powers”, “Master of Heaven”, and “Avenger of His Father”. Horus was not called “the Krst”. This word in Egyptian means “burial” (it wasn’t a title at all).

Claim: Horus came to fulfill the Law, and was supposed to reign one thousand years.
Truth: There was no Egyptian “law” for Horus to fulfill, and there is no mention of a thousand year reign in Egyptian mythology.

On closer examination, Horus isn’t much like Jesus after all. It’s not unusual for the characteristics of ancient pre-Christian deities to be exaggerated in an effort to make them sound like Jesus. The first step in refuting such claims is to simply investigate the attributes carefully. Beyond this, we must also recognize the expectations and yearnings people have related to the existence of God. The Bible rightly describes this yearning and the innate knowledge each of us has related to God’s existence (Romans 1:18-20 and 2:12-16). We shouldn’t be surprised ancient people (created in the image of God) would think deeply about the nature of this God. Many alleged similarities between pre-Christian mythologies and Jesus are extremely general in nature and would be expected from anyone considering the existence of a Divine Creator. Primitive cultures interested in God’s nature reasoned He would have the ability to perform miracles, teach humans and form disciples. These universal expectations fail to invalidate the historicity of Jesus. As Paul recognized on Mars Hill (Acts 17:22-31), men thought deeply about the nature of God prior to His arrival as Jesus. Sometimes they imagined the details correctly, sometimes they didn’t.

In the end, similarities between Jesus and mythological precursors fail to invalidate the historicity of Jesus. The historical veracity of Jesus is determined from the evidence supporting the reliability of the eyewitness accounts. Jesus is not simply a retelling of the Horus myth. While Horus worship is now a dead religion, Christianity continues to thrive. Why? Because the Christian records are reliable (for more on this, please refer to Cold-Case Christianity). Skeptics sometimes portray Horus as something he isn’t in order to keep us from believing in Jesus as something He is. But the reliable Biblical record establishes the Deity of Jesus in a way no other ancient mythological text could ever hope to achieve.