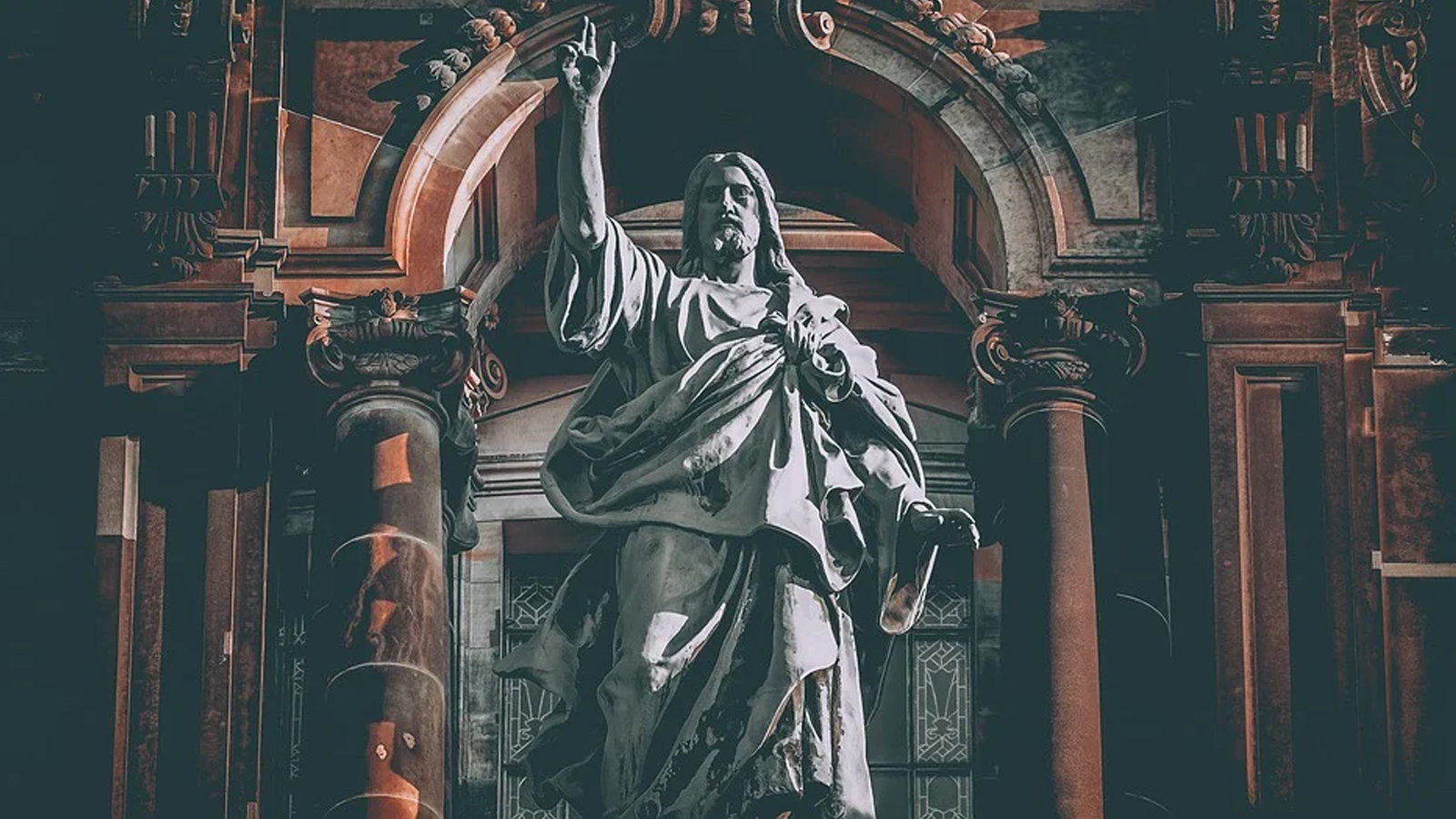 Many Christian pacifists cite the words of Jesus to argue He would never condone any kind of deadly force (in spite of the obvious justifications for killing allowed by the Old Testament Law). They typically cite the following passage (from the Sermon on the Mount) to make their case:

Luke 6:27-31
“But I tell you who hear me: Love your enemies, do good to those who hate you, bless those who curse you, pray for those who mistreat you. If someone strikes you on one cheek, turn to him the other also. If someone takes your cloak, do not stop him from taking your tunic. Give to everyone who asks you, and if anyone takes what belongs to you, do not demand it back. Do to others as you would have them do to you.”

What did Jesus mean here when He said, “If someone strikes you on one cheek, turn to him the other also”? Was Jesus advocating pacifism? If we consider this passage in the context of Jesus’ life, other teachings in the gospels, and the immediate context of the Sermon on the Mount, it’s difficult to interpret it as an effort to advocate pacifism. When Jesus told His followers to “turn the other cheek,” He was referring to personal retaliation rather than to responses related to criminal offenses or actions related to military force. Jesus was not contradicting God’s Old Testament laws regarding the use of deadly force, but was, instead, encouraging His followers to resist the desire to react personally when their dignity or pride had been insulted. He also told his followers to resist lawsuits related to personal finances (Luke 6:40), personal liberty (6:41) and personal property (6:42). This passage involves personal rights and not was not a dictate related to the use of deadly force. While this passage in isolation has been used to make a case for pacifism, it must be read in the context of all Jesus’ actions and teachings. The life of Jesus helps us to understand what Jesus taught and believed about the use of deadly force:

Jesus Believed Some Causes Call for Aggressive Action
Jesus was quick to act aggressively to defend what He believed was right:

John 2:13-16
When it was almost time for the Jewish Passover, Jesus went up to Jerusalem. In the temple courts he found men selling cattle, sheep and doves, and others sitting at tables exchanging money. So he made a whip out of cords, and drove all from the temple area, both sheep and cattle; he scattered the coins of the money changers and overturned their tables. To those who sold doves he said, “Get these out of here! How dare you turn my Father’s house into a market!”

Jesus Called for the Use of the Sword
In Biblical times, the only “sidearms” available to people to use for protection were knives or swords. Today’s equivalent weapons would be pistols and automatic rifles. Jesus told his disciples to arm themselves with swords:

Why would Jesus say this? At the very least, Jesus was calling His disciples to prepare themselves for their own defense. And the sword (a killing instrument) was evidently permissible in the eyes of Jesus.

Jesus Never Condemned the Life, Calling or Duty of Those Who Exercised Deadly Force
Jesus’ beliefs related to the appropriate use of force gave Him a proper perspective on the role of soldiers who regularly used deadly force. Maybe that’s why Jesus never commented negatively on soldiers with whom he came in contact:

Matthew 8:5-12
When Jesus had entered Capernaum, a centurion came to him, asking for help. “Lord,” he said, “my servant lies at home paralyzed and in terrible suffering.” Jesus said to him, “I will go and heal him.” The centurion replied, “Lord, I do not deserve to have you come under my roof. But just say the word, and my servant will be healed. For I myself am a man under authority, with soldiers under me. I tell this one, ‘Go,’ and he goes; and that one, ‘Come,’ and he comes. I say to my servant, ‘Do this,’ and he does it.” When Jesus heard this, he was astonished and said to those following him, “I tell you the truth, I have not found anyone in Israel with such great faith. I say to you that many will come from the east and the west, and will take their places at the feast with Abraham, Isaac and Jacob in the kingdom of heaven. But the subjects of the kingdom will be thrown outside, into the darkness, where there will be weeping and gnashing of teeth.”

Jesus praised the faith of the soldier without making a negative statement about his work or life as a warrior. This is similar to the approach John the Baptist took with soldiers who came to be baptized:

Luke 3:12-14
Tax collectors also came to be baptized. “Teacher,” they asked, “what should we do?” “Don’t collect any more than you are required to,” he told them. Then some soldiers asked him, “And what should we do?” He replied, “Don’t extort money and don’t accuse people falsely-be content with your pay.”

John also failed to scold the soldiers for the work they were doing. Like Jesus, he didn’t tell these soldiers they should disarm and become pacifists.

Jesus Agreed with the Father’s Perspective on War
God occasionally commanded the Israelites to engage in war in the Old Testament (carefully limiting these commands to the justifications He provided for the use of deadly force). The Bible declares the nature of God to be unchanging:

James 1:17-18
Every good and perfect gift is from above, coming down from the Father of the heavenly lights, who does not change like shifting shadows.

Given the unchanging nature of God and His declarations related to the use of deadly force, consider the following passages:

John 14:9-10
Jesus answered: “Don’t you know me, Philip, even after I have been among you such a long time? Anyone who has seen me has seen the Father. How can you say, ‘Show us the Father’? Don’t you believe that I am in the Father, and that the Father is in me? The words I say to you are not just my own. Rather, it is the Father, living in me, who is doing his work.”

John 14:24
“These words you hear are not my own; they belong to the Father who sent me.”

Jesus is Himself a Warrior
With this in mind, it’s much easier to understand and accept the way Jesus is depicted in the Book of Revelation, where He is described as a warrior at the End Times:

Revelation 19:11-21
I saw heaven standing open and there before me was a white horse, whose rider is called Faithful and True. With justice he judges and makes war. His eyes are like blazing fire, and on his head are many crowns. He has a name written on him that no one knows but he himself. He is dressed in a robe dipped in blood, and his name is the Word of God. The armies of heaven were following him, riding on white horses and dressed in fine linen, white and clean. Out of his mouth comes a sharp sword with which to strike down the nations. “He will rule them with an iron scepter.” He treads the winepress of the fury of the wrath of God Almighty. On his robe and on his thigh he has this name written: KING OF KINGS AND LORD OF LORDS. And I saw an angel standing in the sun, who cried in a loud voice to all the birds flying in midair, “Come, gather together for the great supper of God, so that you may eat the flesh of kings, generals, and mighty men, of horses and their riders, and the flesh of all people, free and slave, small and great.” Then I saw the beast and the kings of the earth and their armies gathered together to make war against the rider on the horse and his army. But the beast was captured, and with him the false prophet who had performed the miraculous signs on his behalf. With these signs he had deluded those who had received the mark of the beast and worshiped his image. The two of them were thrown alive into the fiery lake of burning sulfur. The rest of them were killed with the sword that came out of the mouth of the rider on the horse, and all the birds gorged themselves on their flesh.

So, is Jesus the pacifist some would like us to accept? If we, as Christians, are to model our lives after the life of Christ and be imitators of Jesus (Ephesians 5:1), then we will also find ourselves embracing the view of war Jesus clearly reflected in Jesus’ life and actions. While it is true Jesus never resisted those who would eventually nail Him to the cross, this effort on the part of Jesus was a unique and specific act of submission designed to accomplish the Salvation all of us so desperately need. Jesus’ final act of obedience did not contradict his prior actions and teachings related to the use of deadly force. Jesus was not a pacifist, even though He chose to passively submit His life to save those who trust in Him.