I’ve learned something important in the many homicide trials I’ve worked over the years: There’s always more than one way to explain evidence. Jurors are asked to evaluate two different interpretations of the evidence they’ve been presented, and they’re usually asked to assess two completely different theories related to the crime. While the Standard Cosmological Model (describing a universe with a beginning) is still the dominant theory among cosmologists and physicists, a number of competing ideas have been offered to describe the origin of the universe. Some of these explanations would allow us to stay “inside the room” of the universe to explain its existence, others would not. Do any of these alternatives disprove the reasonable inference the universe had a beginning, however? No. Sitting in criminal trials over the years, I’ve come to recognize three critical liabilities common to faulty arguments: They are either (1) unsupported by the evidence, (2) have erroneously redefined critical aspects of the data, or (3) suffer from logical contradictions. In an effort to explain the evidence we’ve described in the universe, scientists looking for an alternative to the Standard Cosmological Argument have considered a number of possibilities over the years. They’ve asked some important questions, but their answers and explanations suffer from the liabilities I’ve observed in my criminal trials:

Could the Universe Be Expanding Eternally?
Some scientists have explored this question in an effort to explain the expansion of the universe without acknowledging or explaining its beginning. Historic models like the Steady State Theory claimed the universe had been stretching and filling in eternally without an origin. But theories of this nature lacked evidential support, particularly once the cosmic background radiation and over-abundance of helium was discovered.


Could the Universe Be Cycling Eternally Between Expansion and Contraction?
Oscillating or cyclical theories claim the universe has been expanding and contracting eternally. But early versions of these theories are also unsupported by the evidence. There isn’t, for example, sufficient mass in the universe for gravity to slow its expansion to cause a repeating cycle. More current cyclical models (like the Cyclic Ekpyrotic Scenario) are even more speculative, relying on highly controversial String Theory physics, leaving many questions completely unaddressed. As a result, these theories have not replaced the Standard Cosmological Model.

Could the Universe Be Part of a Larger, Eternal Environment?
A variety of quantum theories acknowledge the beginning of our universe, but seek to place it in the context of a larger eternal setting. These theories claim the universe emerged from sub-atomic “virtual particles” in a pre-existing, eternal quantum vacuum. Models of this type still have to explain the origin of the vacuum, however. In addition, these proposals redefine the meaning of “nothing” when describing the pre-existing, (1) primordial vacuum, (2) virtual particles, and (3) time from which our universe emerged. The evidence demonstrates all space, time and matter began with the origin of our universe. Whatever preceded this universe cannot, therefore, have been spatial, temporal or material, at least by the definitions we have been using all along. Emergent models redefine the meaning of “nothing” to include “something” (the primordial vacuum, virtual particles, and time). While this solves the problem semantically, it doesn’t solve the problem evidentially. The beginning of the universe cannot be explained from “inside the room”. The evidence points to an external cause outside of space, time, and matter. Click To Tweet

The beginning of the universe cannot be explained from “inside the room”. The evidence points to an external cause outside of space, time, and matter. Cosmologist Paul Davies, recognizing the dilemma presented by the evidence, writes, “One might consider some supernatural force, some agency beyond space and time as being responsible . . . or one might prefer to regard the [beginning of the universe] as an event without a cause. It seems to me that we don’t have too much choice. Either… something outside of the physical world… or… an event without a cause.” This inference of a cause “outside the room” is reasonable, given the strength of diverse evidence for a caused universe, and the inadequacy of efforts to stay “inside the room” of the universe for an explanation: 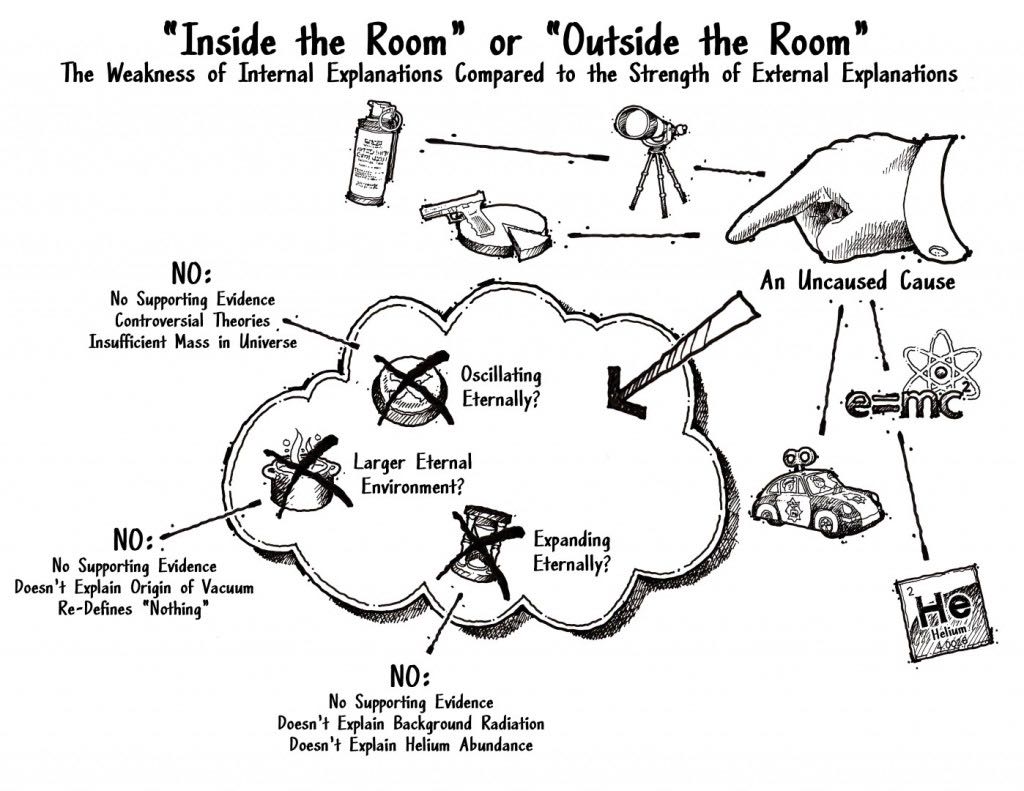 Illustration from God’s Crime Scene
For more information about the evidence for the beginning of the universe, refer to our FREE Bible Insert (Why We Know Our Universe, And Everything In It, Had A Beginning)

I’ve briefly excerpted this from my new book, but if you’re interested in the detailed summary of the evidence (and the reason why this evidence points to an eternal first cause “outside the room” of the natural universe), please read God’s Crime Scene: A Cold-Case Detective Examines the Evidence for A Divinely Created Universe, Chapter One – In the Beginning: Was the Universe an Inside Job? Join our Cold-Case Christianity Community for access to a downloadable Bible Insert on this topic.