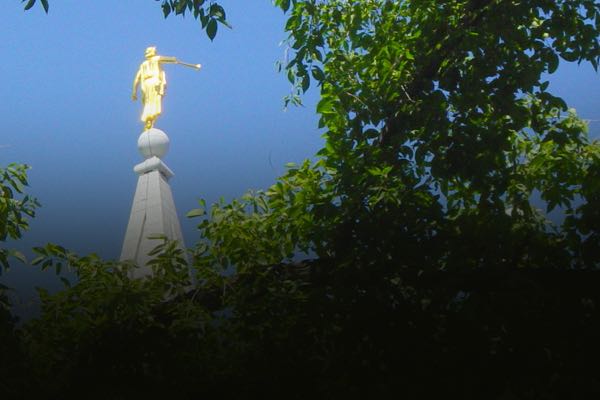 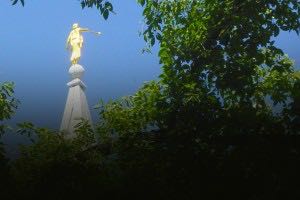 Sean McDowell and I just returned from another trip to Utah. We’ve been training young Christians for years to take this trip, and this time around we brought 38 students to share the Gospel with Mormon believers. This trip has been particularly meaningful to me over the years, especially given my family background. My father’s second wife is a Mormon, and I have six brothers and sisters who were raised as Latter Day Saints. When I first began to investigate the New Testament gospels at the age of thirty-five, one of my siblings encouraged me to examine Mormonism. I read the Book of Mormon and studied its claims as I investigated Christianity. I applied a four-part eyewitness reliability template to both sets of scripture. This approach falsified the Book of Mormon even as it verified the New Testament gospels. As a result, I became a Christian at the same time I became a “not-Mormon”. In the years since, I’ve repeatedly visited the state of Utah to share the truth and help people understand the differences between the two religious worldviews. Salt Lake City is the mecca of Mormonism, and it’s a difficult place to evangelize. In spite of this difficulty, many of us return to the Beehive State because we love the Mormon people. And one of the things I’ve come to love most about Mormons is their commitment. Latter Day Saints (at least those we’ve encountered in the state of Utah) live as true citizens of their worldview. Let me explain.

I am sometimes frustrated with Christians who seem to take an apathetic approach to their worldview. Many of us are little more than accidental Christians; we happen to be in the right place, believing true claims, but we don’t really know why the claims of Christianity are true. We’ve never actually examined the case for what we believe. We’re here by accident. I’ve analogized this to state citizenship, and I’ve used my own experience as a Californian to illustrate the point. I accurately identify myself as a Californian even though I don’t really know much about California at all. I can’t tell you much about the state’s history, statistical details or demographic makeup. I don’t know how many counties there are or their names, and I don’t know precisely how the state legislature is structured. If you press me for details, you might wonder if I’m a Californian at all. But I am; I was born and raised here, after all. It seems many of us are Christians the same way I’m a Californian. We’ve been here most of our lives and we’re comfortable and familiar. But don’t ask us for any details.

Let me take the analogy to another level. Although I truly love my state, if “push came to shove” and I were forced to move, I really wouldn’t have a problem relocating to another state. If my job moved me to Arizona, for example, not much of my life would change. I’d still wear the same kinds of clothes, eat the same foods, do the same things in my off-duty time and I would interact with my family in the same manner. In a similar way, I think many Christians would also have little difficulty moving to a different worldview. Most of us aren’t all that committed to our Christian worldview, if we are really honest with ourselves. We haven’t allowed our Christian “statehood” to shape our choices or actions. In many ways, we live and act like the non-believers around us. If we were forced to move to another worldview (like atheism, for example), we could go right on with our lives and they probably wouldn’t look all that different. While this statement may seem harsh, think about it for a minute. I’m not just pointing a finger at others; I’m often just as guilty.

The Mormons I’ve encountered in Utah are very different, however. They take their citizenship seriously. For them, leaving Mormonism is much more like changing countries than changing states. If my job moved me to Albania, rather than Arizona, lots of things would change. I’d be forced to wear different clothing, eat different food and speak a different language. I’m sure the culture there would even change the way I interact with my family. While I may not resist a move to Arizona, I’d do whatever it takes to avoid a move to Albania because it would fundamentally change the way I live and breathe. Sadly, this seems to be the difference between Christians and Mormons. We Christians seem to have taken our worldview for granted. We are apathetic residents of a state while Mormons are passionate citizens of a nation. Many of the Christians I’ve taken to Utah are amazed by how strongly Mormons seem to resist our efforts to share the truth. That’s because we, as Christians, mistakenly think Mormons are as loosely affiliated with their religious worldview as we are with ours. That’s simply not the case.

From a very early age, Utah Mormons entrench themselves in their faith system. They spend more time in Mormon wards on Sundays than we typically spend in church. They are also much more connected to their local body of believers and they are committed to educating and equipping their members. Grade school Mormons attend “primary” classes, high school believers attend “seminary” and college students attend “institute” classes. Young Latter Days Saints perform their two year mission at the age of nineteen. Their commitment to Mormon citizenship is commendable. After this kind of upbringing, it would be unthinkable to leave all they know to move to another country. That’s why Mormons don’t easily walk away from their faith, even when they’ve discovered it’s untrue.

This commitment and passion is attractive, even if it’s misplaced. Every year, when I return from one of these trips, I am inspired to live my Christian life with more enthusiasm, commitment and dedication. I also come home with a broken heart, however. Mormons will do more for a lie than we Christians will do for the truth, and it’s heartbreaking to see so many well-intentioned, loving people so deceived. Latter Day Saints reject the Christian notion of grace. Rather than accepting the grace of God as an unmerited free gift of Salvation, they believe grace is simply the power God has given them to be obedient. God doesn’t save Mormons freely; He just gives them access to the power they hope to use to save themselves. Mormons must work diligently to be exalted in Celestial Kingdom, and none of them has any certainty of salvation in this life. Many are weary, frustrated and insecure of their position before a Holy God. Those who have successfully denied their fallen nature seem better able to cope, those who understand the level of their sin are losing hope. The Gospel of the cross ought to be a beautiful message for this group, but few are willing to accept it. To do so would be the equivalent of moving to another country (or, more accurately, another planet). They would have to abandon their identity and leave everything they know.

This incredibly heartbreaking reality ought to give us pause, both in the way we interact with our Mormon friends and family and the way we live and breathe as Christians. I love my Mormon family and I admire their commitment. It has encouraged me to renew my own resolve and do whatever it takes to share the Gospel of grace with a group whose dedication is commendable, even if it is misplaced.