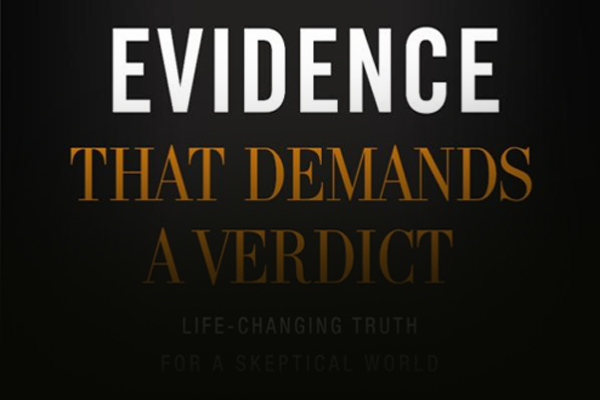 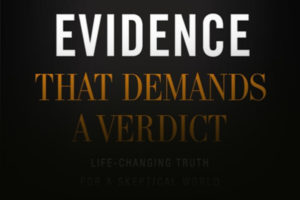 If you’re interested in apologetics (or “Christian Case Making,” as I like to call it), you probably own a copy of Josh McDowell’s classic work, Evidence That Demands a Verdict. Did you know that there is a brand-new edition of this great resource? My good friend, Sean McDowell, has co-authored the most recent version, and he agreed to talk a little bit about the latest edition of this important book:

J. Warner:
I remember how important the first Evidence That Demands a Verdict was for me in the first years I became a Christian. I didn’t find out about it until I spent hundreds of hours investigating the Gospels, but I was comforted by the fact your dad had examined the case so carefully. How important was your father’s work in your own life? Did he share his investigation with you as a child?

Sean:
My father’s story was probably the central narrative of my childhood (pointing towards the gospel, of course). His entire life and ministry has been an extension of his painful childhood, his surprise at the evidence for Christianity, his conversion, and then his changed life. He actually wrote the first version of Evidence That Demands a Verdict in 1972, four years before I was even born. And he had converted years before that, in 1959. So, unlike Lee Strobel, my father’s investigation and conversion was long before he was married or had kids.

But, when I was growing up, he was always talking about the evidence for Christianity over the dinner table, with strangers, and in his talks. He was careful not to overwhelm us kids, but he loved the manuscript evidence so much, he just couldn’t resist talking about it. There’s no doubt his passion for truth, and the evidence itself, have played a huge role in my life.

J. Warner:
Over the years as you were growing up with your dad, what role did Evidence That Demands a Verdict play in your own life? Why do you think it still stands the test of time?

Overall, my parents deeply engrained in me the importance of truth. My father would impress upon me how important it is to read both sides of an issue, weigh the evidence, and then decide. So that’s what I did when I went through a phase of doubt. I don’t want to over-dramatize it, but having a father who so deeply values truth left an indelible impression on me.

J. Warner:
Some of the evidence your dad described in the first Evidence That Demands a Verdict is relatively “evergreen” in that it really hasn’t changed in the past 2,000 years. Why did you both feel it was time to update the book?

Sean:
Yes, some of the evidence, such as fulfilled prophecy, and certain archaeological finds, are “evergreen.” We incorporated these issues in the updated version. But this is only a fraction of the 2017 edition. Since the last version in 1999, there have been a ton of objections raised by both scholars and lay people against the evidence for Christianity. We felt it was critical to offer responses to some of these objections against the Bible, the resurrection, and the deity of Christ.

And second, there are some new issues that have arisen in culture that need addressing. For instance, we have updated almost the entire section on the Old Testament. In the 70s – 90s, the JEPD theory (documentary hypothesis) was a huge issue. Now, it’s only a secondary issue. We re-oriented the entire section to focus on historical events and people such as the existence of Adam, the Patriarchs, the Exodus, the Conquest, and more.

Third, there are some entirely new chapters that needed inclusion. One of my favorite chapters is called, “Is Christianity a Copycat Religion?” The idea that Christianity borrowed its core claims from Mithras, Osiris, Horus, and other pagan deities is rejected in scholarship, but has a massive influence on the Internet, and so we included a response. We also included an appendix responding to some of the main claims made by Bart Ehrman.

J. Warner:
Some people already own the first or second edition of the book, speak to those people specifically and tell them what is unique about this edition.

Sean:
Simply put, there has been a massive amount of new evidence for Christianity since Evidence That Demands a Verdict was last written. For instance, the chapter on the reliability of the New Testament has been completely updated and revised. We include new manuscript finds, new archaeological discoveries, and many other new lines of evidence, such as “hidden coincidences,” as developed by Lydia McGrew, which help confirm the independent testimony of the various Gospels.

I had a team of scholars and grad students who did remarkable research being sure we have the most up-to-date resource to help defend the faith. If you valued an earlier edition of Evidence, then I think you will be pleasantly surprised how this follows its format and approach, but is also a radically revised update. I would estimate it is at least 60-70% new material.

J. Warner:
I know your heart, Sean, and few people are as committed to sharing the Gospel as you are, with grace and truth. What are your personal hopes for this book?

Sean:
I have two big hopes. First, to re-launch Evidence for a new generation. God has used this book remarkably over the past four decades, and my hope is to continue that influence into the future. Despite what critics have been claiming, young people do still care about truth. There is a generation of students who need to know that their faith is well grounded, and there are many non-believers who will respond positively to Christianity, if they can have their questions answered.

Second, to model how apologetics can be done today with both grace and truth. We do present the evidence throughout the book as strongly as we can, but we are also very careful to be gracious towards people who disagree. We want to treat critics kindly. We try not to overstate the evidence. And we also frame the book with my father’s story. I hope that people will not only benefit from the evidence, but also the manner in which we present it.

If you’ve got an area on your bookshelf reserved for books that make the case for Christianity, make sure the new edition of Evidence That Demands a Verdict occupies an important place among any other resources you may own.