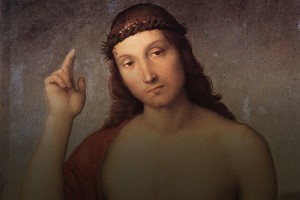 Last week I presented the case for the Resurrection of Jesus at the University of Transylvania in Lexington Kentucky. The students there listened attentively as I traced the New Testament “Chain of Custody” to demonstrate how early Church Fathers (like Polycarp, Ignatius and Clement) helped establish the reliability of the Resurrection account. I recounted the writings of many of these early Church leaders as they described what they learned from the original disciples and eyewitnesses of Jesus’. Historic claims related to the life of Jesus and the Resurrection can also be traced in the writings of men like Irenaeus, Hippolytus, Origen, Tatian, Justin Martyr and many others. After the talk (during the Q and A), one astute student noted some of the Church Fathers in my “Chain of Custody” actually held heretical positions related to Christian doctrines. He also observed these Church leaders were identified within the historic role-call of Roman Catholic leaders. He questioned how I might be willing to accept their testimony related to what they learned about the historicity of Jesus if I wasn’t willing to accept their “Roman Catholic-ish” beliefs about things such as the role of sacraments, the existence of purgatory or the nature of Mary. Can people who hold different theological views still play an important role in establishing the historicity of Jesus? Yes they can.

When examining the lineage of historic Church leaders, my focus is simply on their descriptions related to what they were taught by those who preceded them related to the facts of Jesus’ life and ministry. As a result, I am primarily concerned with their descriptions of the Gospels and the details included in these historical narratives. When a Church Father begins to pontificate on a theological position or interpretation, I recognize this as outside the scope of his testimony. An early Church leader may try to infer something about the nature of Jesus, for example, from the virgin conception, but this is not what concerns me. I am simply interested in the earliest accounts about the birth of Jesus and how these accounts were transmitted to those who came after the authors of the Gospels, not what these accounts imply. When examining an early Church Father, I am only interested in, “What were the facts about Jesus’ life you received from those who preceded you?” not, “What do you think all this means?”

We don’t have to agree with every theological position of an Early Church Father to recognize his value in helping us make the case for the accurate transmission of the Gospels. Click To Tweet