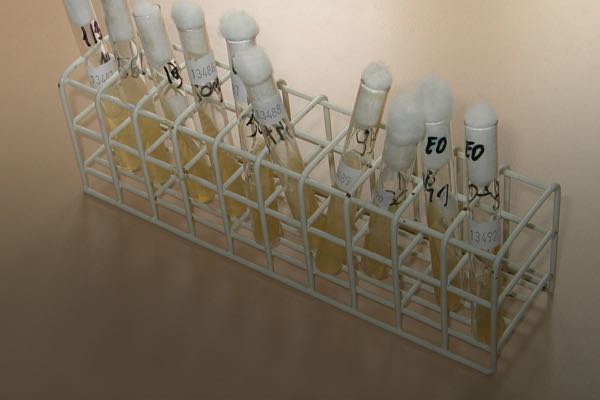 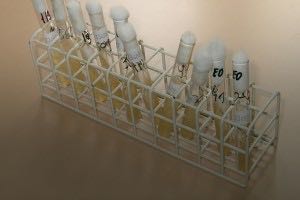 In my new book, God’s Crime Scene: A Homicide Detective Examines the Evidence for a Divinely Created Universe, I make a comprehensive case for the existence of God from eight pieces of evidence in the universe. In Chapter Three (The Origin of Life: Does the Text Require an Author?), I describe the futility scientists have experienced when trying to identify the location in the universe where life might have originated without the intercession and involvement of an Intelligent Designer. The origin of life requires the emergence of pre-biotic molecules (amino acids and nucleotide bases). Where could this have happened? Could life have originated from “inside the room” of the natural universe? If so, where, and is there a better explanation for the origin of life “outside the room” of the universe? (For more on this “inside the room” or “outside the room” investigative analogy, please refer to the Opening Statement of God’s Crime Scene). Naturalistic scientists have repeatedly failed to identify an evidentially reasonable location for the origin of life, despite a concerted effort over many years. Here is a very brief summary of the failed attempts to locate a reasonable naturalistic point of origin:

Could Life Have Started in the Atmosphere?
You may remember the famous 1952 Miller-Urey experiment from your high school or undergraduate biology class. Stanley Miller and Harold Urey mixed ammonia, methane, water vapor, and hydrogen and passed an electric charge through the circulating gases. Within a week, they found several types of amino acids had been created. This experiment later became the “poster child” for a naturalistic explanation of the basic building blocks of life. Many believed it proved amino acids could be formed naturally in the atmosphere of the early earth. But with the evidence we now have about the conditions of the early atmosphere, we know the gases used by Miller and Urey were not present in the quantity or proportion they used. While this experiment may have some historical significance, it does not prove life could originate in the atmosphere. In fact, scientists now believe the early atmosphere simply could not produce amino acids at any significant or necessary level.

Could It Have Started in Water?
Like the Miller-Urey experiment, the concept of an ancient “primordial soup” is an iconic fixture in most entry-level biology textbooks. Soviet biologist Alexander Oparin first proposed the idea in 1924, arguing “chemical evolution” took place in the Earth’s early waters, resulting in the formation of amino acids, then primitive proteins. But aside from the fact we have no physical evidence to support the existence of a “primordial soup,” we now know the “chicken and egg” relationship between proteins and polymer chains (DNA) makes their simultaneous appearance in water extremely unlikely (to put it mildly). In addition, the absence of significant sources of phosphate for the early formation of DNA, RNA or ATP is prohibitive in this environment. Worse yet, there would be no way to limit the proportion of left and right “handed” amino acids, nucleotides and sugars in the “primordial soup”, making the formation of DNA and RNA molecules exceedingly difficult.

Could It Have Started On Land?
Some researchers have proposed a scenario in which local terrestrial conditions, such as those occurring in clay, might capture water on occasion, allowing the necessary molecules to form and interact. But when trying to recreate these conditions in the laboratory, scientists have come to realize the impossibility of stabilizing the environment to allow for the formation of the necessary cellular components.

Could It Have Started In the Earth?
Some scientists have proposed an underground location for the origin of life where molecular formation would be protected from water and atmospheric interference. But the underground locations available in the early earth would have been incredibly hostile to the formation of bio-chemical precursors, proteins and RNA. Just as problematic would be imagining a scenario in which these primitive forms of life could then transition from their underground origin to their eventual homes above ground.

Could It Have Started In Space?
Some scientists, frustrated with the lack of progress locating a reasonable earthly source for pre-biotic molecules, have turned their attention to outer space. But even if the basic building blocks for life, amino acids, were delivered to earth in a meteorite, this would still fail to explain how the simple molecules formed into the more complex proteins and nucleic acids necessary for life, given the “chicken and egg” problem (refer to Chapter Three of God’s Crime Scene). And if these more complex organic elements came to us from space, how did they originate there and how could they survive the entry into earth’s atmosphere? There’s a reason why scientists are so divided over the location of life’s origin: None of the proposed environments offer a viable, reasonable explanation. Click To Tweet

There’s a reason why scientists are so divided over the location of life’s origin: None of the proposed environments offer a viable, reasonable explanation. Arizona State Cosmologist Paul Davies agrees: “Origin-of-life researchers cannot identify any location on primordial Earth suitable for production of pre-biotic molecules.” Every effort to stay “inside the room” of the natural universe to explain the origin of life simply fails: 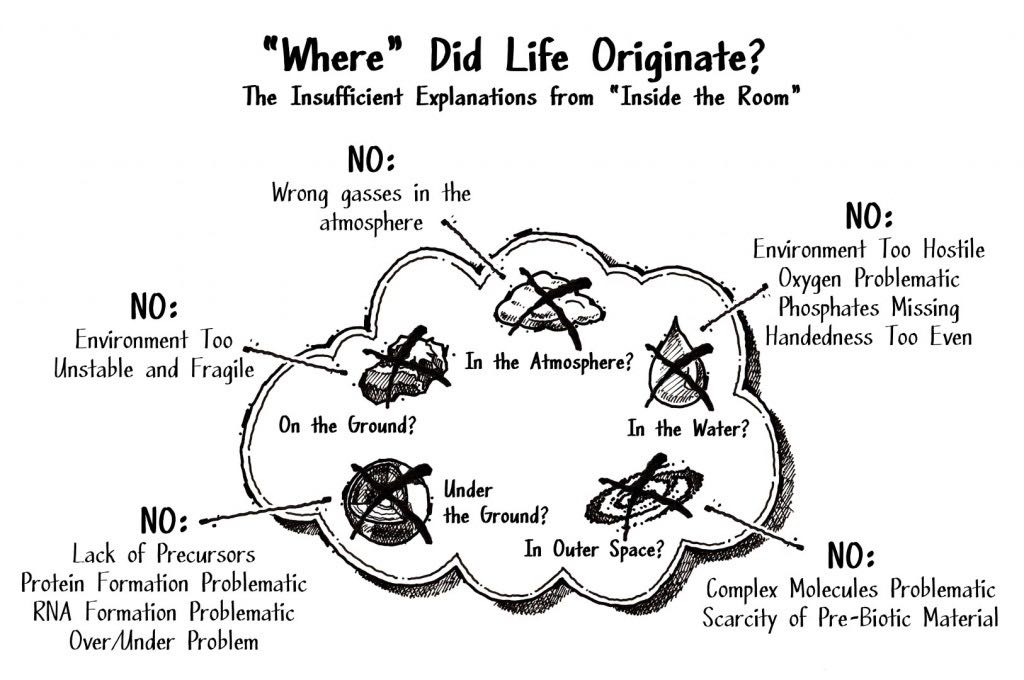 Every good detective learns the importance of simple investigative questions that start with “what,” “when,” “where,” “why,” and “how”. Scientists investigating the origin of life simply cannot answer the “where” question, but that isn’t the only question they can’t answer. In God’s Crime Scene, I also describe their inability to answer the “when,” “why,” and “how” questions. One reason these questions are so difficult to answer may simply be there refusal to ask another important investigative question beginning with “who”. The impersonal laws of physics and chemistry cannot account for the origin of life. There is, however, a personal force who better explains the existence of life in our universe. A personal, all-powerful Creator God best explains the incredible, otherwise inexplicable presence of life in our universe.

This brief blog post (excerpted from my book) really doesn’t do justice to the evidence I’ve described. For a much more thorough description of this evidence, please refer to God’s Crime Scene, Chapter Three – The Origin of Life: Does the Text Require an Author?